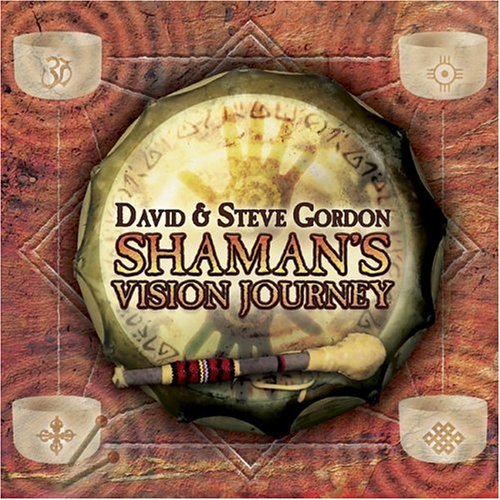 Enter a Sacred Dream - This soothing-trance music invites you to remember your own inner peace. Award-winning artists David and Steve Gordon (Sacred Earth Drums, Drum Medicine) combine the Tribal drums and reverent Native Flute melodies they are renowned for with relaxing atmospheres, ancient Shaman chants (Lakota, Tibetan, Aboriginal and Mayan) guitars, sounds of nature and the healing resonance of Crystal Bowls. The album consists of four serenely hypnotic 20-minute movements that correspond to the Native-American four directions and the four sections or worlds that make up a Shamanic Journey.  This peaceful soundscape will nourish your Massage, Meditation and Yoga as well as being the perfect music for starting your day or unwinding at night.

"Primal rhythms and Native Flutes once again intertwine in the percussive panoramas of David and Steve Gordon. Past releases from the Gordons, like SACRED EARTH DRUMS and DRUM MEDICINE, have proven their mastery of shamanic sounds in a healing setting and became top sellers in the genre. SHAMAN'S VISION JOURNEY takes things one step further with the introduction of some fascinating instrumentation choices. Crystal bowls, uncommon for a World percussive album, are used with great effect in the music, adding a mystical glow to it. Subtle ancient chants (Tibetan, Sanskrit, Aboriginal, Mayan amp; Lakota) and Indian drone instruments provide additional Eastern influence in the music, and make an intuitive counterpoint to the haunting Native American flute. The most striking thing about the album is the rhythms, which are rich, earthy and invigorating. " ~ Music Design In Review

"Primal rhythms and Native Flutes intertwine in these percussive panoramas...the rhythms are rich, earthy and invigorating. " -- Music Design in Review"span"

"The Gordons have juiced up the tribal groove  their melodies are prettier and their rhythms are more compelling." -- Billboard"span"

Dave and Steve Gordon got started with Shamanic music via their love for the Sequoia Forests, which they visited as youths. They recorded the sounds of those woods and incorporated them into their music. It's been documented as medical science that certain drum timbres and rhythms can lull a listener into a trance and a whole rediscovery of the art of shamanism has merged around this. Shaman's Vision Journey is another chapter in the Gordons' amazing contribution to this field. It's a trek homeward, a galvanizing and evocative progression of incessant, hypnotic shaman drum and shaker beats, accented by voice, synthesizers, guitars, and flutes and of course, the mysterious and soothing sounds of the great forests they love. -- DailyOM.com

New from the popular brothers David Gordon and Steve Gordon, the godfathers of tribal drumming, is Shaman's Vision Journey -- a soothing trance-based musical journey that invites you to discover your own inner peace through a shamanic journey. The duo has exerted considerable energy into finding authentic shamanic material to work with and has incorporated chants from several mystical traditions, including Lakota, Sanskrit, Aboriginal, and Mayan. The four instrumental tracks are laden with soft melodies underlined with layers of gentle drumming and relaxing atmospheres. Shaman's Vision Journey is a great extended soundscape to enhance your massage or spa session and is a clean and wonderfully engineered recording to get lost in your headphones with. -- Peter Manzi, Sounds From the Ground Up, 2006

David and Steve Gordon have pioneered New Age/World music with their award-winning top charting albums for over twenty years. Their influential trademark sound, combining world instruments and sounds of nature has sold over one million units worldwide and has appeared on network TV and major motion picture scores such as the recent Fox Searchlight release, "Kissing Jessica Stein."

Since founding Sequoia Records in 1982, the Gordon brothers have been breaking musical ground, consistently creating albums that top the charts, garner awards, and expand the boundaries of New Age and World music. "We like to think of our music as the music of Earth and Spirit, because we believe that one of the goals of being alive is to unite the two into one," explains Steve Gordon.

Natives of Southern California, David and Steve Gordon both took an early interest in music. After studying classical music at Los Angeles Valley College and UCLA, the brothers both attended the Grove Music Academy where they studied modern harmony and jazz.

They formed Sequoia Records in 1982 to release their first two albums Misty Forest Morning and Peaceful Evening. These albums combined music and nature so beautifully that they became known as definitive recordings of the newly emerging New Age music genre... Since these releases met with critical acclaim and healthy sales, over the next couple of years they recorded their next two music and nature titles, Radiant Sea and Still Waters. They next began experimenting with their music, developing a new style they called "Inner Environments", which they featured on two albums, Astral Journey and Celestial Suite. These recordings were some of the earliest examples of what is known today as Ambient/Space Music.

In the early '90's the brothers began to collect Tribal drums and studied the Native American flute. They envisioned a contemporary world music, combining traditional Native instruments, with guitar, keyboards, and sounds of nature into a new universal world groove. Their 1994 release Sacred Earth Drums successfully blended all of these elements, topping the New Age charts. This influential crossover recording reached #1 at all the New Age distributors immediately upon release, stayed there for over 3 years and even now remains high on distributors sales charts.

In 1996, David and Steve went back into the studio and created the follow-up to Sacred Earth Drums, which they titled Sacred Spirit Drums. Immediately it began to receive enthusiastic reviews. Steve Ryals of New Age Retailer's Fresh Tracks said, "Each superb track flows into the next. Evocative, mysterious, sensual, and profoundly healing."

"span"In 1999 David and Steve inaugurated their new studio by creating Drum Medicine, which again became an immediate top seller on new age alternative distributors best selling lists and stayed in the top 5 for over 2 years. "With this new recording, we really wanted to explore the idea of the drum as a force for healing," said Steve. David adds, "There's a more diverse palette of sounds that draw from other cultures. We looked for musical themes in other cultures that resonated with the spiritual basics of the Native American culture." Carl McColman wrote in a feature interview for NAV Magazine, "The Gordon's may have launched out of a Native American sensibility, but as their music has flowered, it has become truly a universal indigenous sound - for all people of the earth, from all cultures." This is precisely what they will continue to do.

To celebrate their 20th Anniversary in March 2002, they released Sacred Drum Visions, a collection of favorite tracks from their best-selling world drumming titles, which also included 3 brand new songs which continue to expand upon their signature contemporary world music sound.

Their much anticipated latest Sequoia Records release "Shaman's Vision Journey" is their first new title in 6 years and is slated for release in May of 2006.

Everyone 12 or older who lives, works, or studies in New Jersey is now eligible for the COVID-19 vaccine.

How to Get Vaccinated

Find a vaccine appointment near you and learn more about vaccine scheduling assistance.

Learn More - How to Get Vaccinated

Help Getting an Appointment

Find assistance to help you get vaccinated – including in-home vaccination

Learn More - Help Getting an Appointment

Learn more about how vaccines keep you and your community safe.